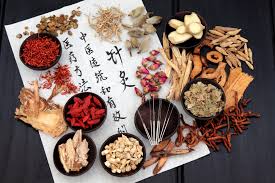 A mother’s body does not instantly return to normal after giving birth. The alteration that occurs during pregnancy will fade gradually and will take time to recover from. A woman will lose blood and ‘Qi’ after childbirth and hence become weak; the period immediately following is critical as health complications may occur.

Herbs are used in traditional confinement techniques to restore and boost the mother’s immune system and nourish and replenish the ‘Qi’ that was drained during birth.

Lycium barbarum, often known as Goji berry or Wolfberry, is an antioxidant-rich fruit strong in minerals and vitamins. Wolf berries have been shown to purify the body, strengthen the liver, and revitalise the kidneys. It also alleviates stress and exhaustion while improving neurological and psychological function.

Angelica Sinensis dried root is a valuable plant for postpartum since it enriches the blood, promotes blood circulation, and regulates the body’s immunological system.

4. Root of the fleece flower (aka Chinese knotweed root)

It has been shown to have anti-inflammatory properties and can aid in enhancing sleep quality.

Red dates is another confinement herb that provides several health advantages. They are a fantastic source of iron, which is essential for breastfeeding women and helpful at renewing red blood cells, boosting the immune system, and acting as a natural anti-depressant.

The presence of polysaccharide present in Black Fungus is known to decrease blood cholesterol. In addition, it can assist in boosting the immune system as it contains Vitamin B-2, known as Riboflavin, which is necessary for general good health.

Tremella fuciformis, as it is technically known, is a potent tonic that is naturally sweet. Snow fungus has been said to tonify the spleen, promote appetite, nourish the lungs, and boost the immune system.

Lotus seeds are high in fibre and antioxidants, making them an excellent tonic for postpartum women. It has also been known to soothe the soul and tonify the spleen and kidneys.

It has also been shown to help digestion, replenish the blood, and strengthen the spleen. It also contains antioxidants and has the potential to support kidney and liver function.

It is known to regulate and boost the immune system and the central nervous system, as well as to nourish the liver and kidneys and to strengthen bones and muscles.